Whether we do it consciously or unconsciously, most of us try to abide by what we perceive to be the social norms of our group. The more localized or personal the group we identify with, the more strongly we are influenced by their norms.

Over the course of my lifetime, I’ve seen that social norm shift. Even when it was still a part of the system itself, more and more people came to believe that all humans are equal. It didn’t have to be everyone. It just had to be enough people that the social norm shifted. By 2015, in most of the country, in most settings, blatantly racist statements no longer fit the social norm.  Racist people knew to keep their mouths shut except in private conversation.

The last few years have seen a backwards shift in the social norm. Blatant racist and sexist statements are being spouted on national television, in political speeches and in protests and rallies.

We need to reestablish a social norm that says that this is unacceptable.

How do we do that?

We DON’T do it by attacking the people who are trying to promote a racist social norm. That just creates a social norm of division. It becomes socially acceptable to publicly hate, insult, shame and attack people who we disagree with. That is not the social norm we want, but it is the one we are moving towards.

Instead, we need to publicly reinforce the social norm of unity that we believe in.

no room in my heart for prejudice side of yard flag

What We Can Learn from Hotel Towels
If you’ve been to a hotel, you have probably seen the little cards that tell you that you can help save the environment by reusing your towel.
Did you?
Researchers found that by appealing to environmental concerns, about 37% of guests reused their towels.
BUT if the card said “JOIN YOUR FELLOW GUESTS IN HELPING TO SAVE THE ENVIRONMENT. In a study conducted in Fall 2003, 75% of the guests participated in our new resource savings program by using their towels more than once,” then the percentage went up to 44%.
If the message specified the individual room number, then the percentage went up to 49%!
Note that the 75% number was actually a lie, but the desire to be part of the majority and follow social norms caused a significant increase in participation. Making the social norm specific to them caused an even greater participation. 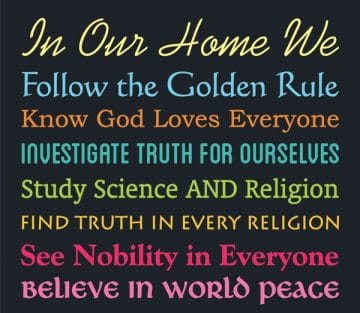 Back, with spiritual messages

So how can we use this information?
We often think of posting a sign, wearing a T-shirt or a button as promoting a cause. But what if we think of it, instead, as establishing a social norm?

If you walk through a neighborhood and see “No Room for Prejudice” signs and window decals in multiple yards, then you will start to think of that as the social norm for your neighborhood. You will subconsciously begin to shift your thinking to become part of the crowd and be on the winning team. Even if you still hold racist views, you will stop SAYING them and promoting them as normal. When no one is saying them, people will want to stop believing them so they can fit in.

Is this as good as life-changing “eureka” moments where people have a change of heart? No. But it still moves the world in the right direction.

On a non-moving side window

One of the least expensive and most visible tools for establishing a positive social norm is a static-cling Window Decal. Imagine how wonderful it would be to walk through a neighborhood and see dozens of cars with this positive message!

That’s why I’ve dropped the 50 pack price in half to only 50 cents each until the end of July- or until I run out, whichever comes first. Put one in an envelope and send them out to all of your friends, or everyone in your church, choir, NAACP or PTA. 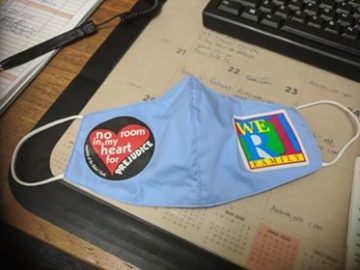 A recent PEW Research poll says that 80% of Americans are wearing masks some of the time when they are out in public. I don’t believe that for a second. (Only 40% say they see OTHERS wearing masks). BUT it shows the power of creating social norms. If we keep telling people that everyone is wearing a mask, then more and more people will start doing so. Eventually, social pressure will make it a fact, and then cases of the virus will begin to drop.

When YOU wear a mask (please do) consider adding one of our stickers to the side. Make both masks AND unity the social norm. 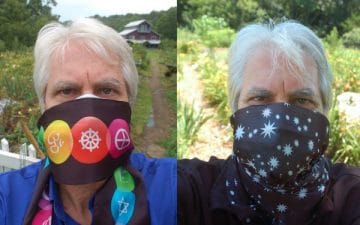 Our silk stoles and scarves provide an added layer of protection on top of your mask. Silk has electrostatic properties that make it an effective filter.
Our black interfaith stole is a little narrow for this purpose, but if you need to identify yourself as a chaplain, this a great way to do it. Our new white stole is a little wider. It is not silk, but does add an extra layer of fabric for protection while being very soft and pretty.
Our silk starry night scarf is extra wide and works well for men and women.

Every day, in every way, I’m getting better and better.